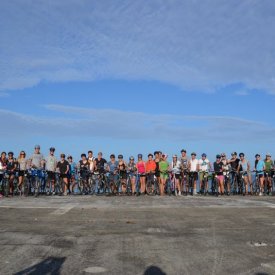 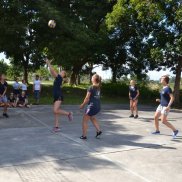 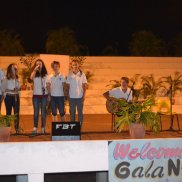 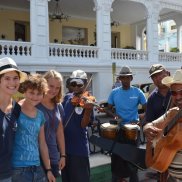 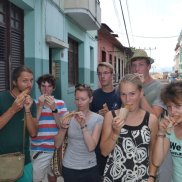 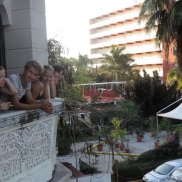 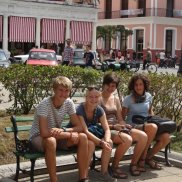 A boarding school for very talented students in Cuba? I think everyone of us already had an idea that you can’t compare it with one of our schools in Germany. I don’t know what I expected, probably I didn’t think about it, but if I did, my idea was totally different!
Just when we arrived there, sweaty and tired because of the strenuous biking trip, every student came to us and welcomed us with a kiss on our cheeks. And that was not all! They had prepared a performance for us with dancing, singing and theatre. I don’t understand why every Cuban is good at singing and dancing. But it’s like that. We enjoyed the staging very much and at the end all the Germans went onto the stage, too, and we all danced together. It was a very good feeling to be welcomed that way!
On our first day in Pinar del Rio we visited the school again and had a conversation with the principal of the school and the students‘ representatives. I think you can compare it with the SV/SMV, but there is a difference anyway: The parents of all of those students are members of the Cuban Communist Party. In this conversation the Cubans told us something about their school life at Friedrich-Engels-School. END_OF_DOCUMENT_TOKEN_TO_BE_REPLACED

“Socialism: a political and economic theory of social organization that advocates that the means of production, distribution, and exchange should be owned or regulated by the community as a whole.”
-Oxford Dictionary

This sentence sounds pretty theoretical and doesn’t really give an insight into life under a socialist system. Our trip to Cuba however…

My “English Report” topic states that we managed to catch a “glimpse” of socialism during our time on Cuba. But after three intense weeks there I firmly believe that we actually managed to catch more than just a glimpse of life under a socialist system. Whether we were taking part in political events or just out shopping: ignoring the fundamental differences between our and the Cuban system was simply impossible. Seemingly every wall on the Caribbean island had socialist propaganda plastered over it (unless Che Guevara’s face had been painted on them), while rhetoric used around us during our tour with ICAP (Instituto Cubano de Amistad con los Pueblos, an institution for Cuban foreign relations) always had an official, state-controlled ring to it. The words “compañeros” (companions) and “solidaridad” (solidarity) always played a big role during official events we attended. END_OF_DOCUMENT_TOKEN_TO_BE_REPLACED